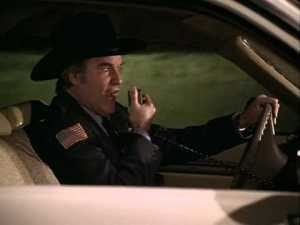 My daughters like routine. Especially, when that routine involves doughnuts.

Whenever they spend time with grandparents, I head to the local doughnut shop to buy breakfast before they leave.

To get there, I turn left out of our neighborhood onto a four-lane state highway. The turn can be tricky if traffic is heavy. Sometimes, I need to drive into the turn lane and then ease my way into traffic. I hate doing this, but this trip was during the morning rush hour. It was either creep into traffic or wait until lunch to turn left.

I was turning north, so when the southbound lanes cleared I drove into the turn lane and managed, fairly quickly, to move into the right hand lane.

While performing my Andretti-like maneuver, I noticed a Highway Patrol car driving southbound. I looked into my rearview mirror and saw that the car was making a U-turn to drive back north. Its lights began to flash.

For some reason, perhaps latent criminal tendencies, I assumed that the officer was going to pull me over. I knew I had done nothing wrong, but I also knew that Rosco had me.

As bad as getting a ticket is, it was an even bigger deal that morning. It just happened that the previous Sunday I had preached about Christian submission to government, from 1 Peter 2:13-17. The example that I stressed was obeying the speed limit.

When I saw the patrol lights flashing, I thought, “Great, it’s Friday morning and all of South Jackson is driving to work. At least half of the church will see me pulled over after I just preached about doing the speed limit.”

In a split second, I decided to own up. Once the ticket was written, I would post about it on Facebook and Twitter and confess my sin publicly, hopefully humorously.

As my resolve steeled, the patrolman passed me and pulled over an 18 wheeler.

If I’ve ever felt that stupid, I can’t remember when.

I knew I was innocent.

Yet, I acted as if I was guilty.

Paul wrote in Romans 6:8–14, “8 Now if we have died with Christ, we believe that we shall also live with Him, 9 knowing that Christ, having been raised from the dead, is never to die again; death no longer is master over Him. 10 For the death that He died, He died to sin once for all; but the life that He lives, He lives to God. 11 Even so consider yourselves to be dead to sin, but alive to God in Christ Jesus. 12 Therefore do not let sin reign in your mortal body so that you obey its lusts, 13 and do not go on presenting the members of your body to sin as instruments of unrighteousness; but present yourselves to God as those alive from the dead, and your members as instruments of righteousness to God. 14 For sin shall not be master over you, for you are not under law but under grace (NASB).”

As Christians, we understand that we have been freed from the power of sin.

We know we are free.

We act as if we are slaves.

If you have surrendered your life to Christ, then you have been freed from the power of sin. This freedom means that each sin we commit comes about because we have decided to sin. God, through the Holy Spirit, has freed us to choose not to sin. We know this. We just don’t act like it.

We also understand that we are not perfect. We will continue to sin until we are with Jesus. But, that general truth is no excuse for our specific sin.

Live free from fear of condemnation because Christ has freed you.

Live free from guilt of past sin because Christ paid the price.

Don’t let the sin you see in the rearview mirror dictate how you will live as you go forward.

Know who you are in Christ.