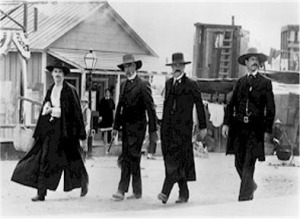 “It’s not worth fighting over.”

“Other things are more important.”

Whenever controversial issues come along, as believers, we must decide when and if to engage in the discussion.  I’ve been thinking about this since news broke a few weeks ago that a Baptist association in Kentucky voted to deny membership to a church because of its Calvinistic theology.

I’m not a Calvinist, Reformed, or sub-post-supra-infra-lapsarian (that’s a theology joke, but count yourself lucky if you don’t know the terms). Historically, Southern Baptist life has contained those of Reformed soteriology (I’m throwing out all the big words to see if my spell check knows them) and Non-Reformed.  We have always worked together for the sake of the gospel.

Calvinism should not divide us.  If we allow it to do so, we risk the future of the Southern Baptist Convention.

First, we have Foundational Doctrines.  These doctrines should be defended at all costs.  They are hills to die on, such as:

Second, we have Denominational Distinctives.  These distinctives determine the identity of our own group, whether that group be Baptist, Presbyterian, Lutheran, etc. Personal convictions make these items worth taking a stand over at the church, denominational and personal level.  They determine where and how we serve the local church.

A few of these distinctives are:

Third, we have Theological Divisions.  These divisions can be found within denominations and should be a family conversation, rather than a domestic dispute.

Divisions vary, but the following and others, can be found in SBC life:

It is interesting to me that we Southern Baptists are now fighting with one another over what I believe to be a third level issue.  To fight over Calvinism is to take what should be an interesting conversation at lunch and turn it into a check of orthodoxy.  It ought not to be this way.

The “Battle for the Bible”, waged in the 1980’s and 1990’s, struck a powerful chord with Southern Baptists because the inerrancy of Scripture is a core issue, a foundational doctrine.  Our leaders—men like Adrian Rogers, Jerry Vines, Charles Stanley, Page Patterson, and others—had to take a stand.  Judge Paul Pressler was right; it was a hill to die on.

Calvinism is not a hill to die on.

It’s not even a hill.