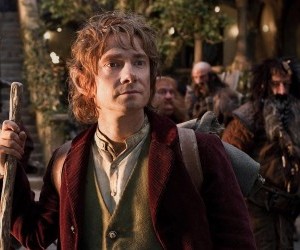 “Bilbo … Bilbo Baggins … bravest little hobbit of them all.”

Those words are from a song, performed by Spock himself, Leonard Nimoy, about the hero of The Hobbit. If you have never seen the video, then it’s worth a quick YouTube search.

Since the publication of The Hobbit, and The Lord of Rings, Tolkien’s Middle Earth has consistently fascinated readers.

I first became aware of Middle Earth in elementary school. On our playground, a few of the boys in my class would play The Hobbit. I hadn’t read the book , so I wasn’t really interested.

I’m sure Tolkien never crossed my mind during high school or the early days of college. Truthfully, I stumbled across Middle Earth while exploring this new thing we had in the late 1990s—the internet.

In college, I learned that George Lucas was making what he was calling “prequels” to the original Star Wars Trilogy. I did an internet search (anyone remember Web Crawler?) and found Starwars.com and TheForce.net. It was on the second site that I found a link to a website about the upcoming The Lord of Rings movies. I decided to read the books before the movies premiered.

I’ve enjoyed Tolkien’s writings ever since. I’ve read The Lord of the Rings twice and plan to reread them again. I completed The Hobbit in one sitting.

Peter Jackson’s film adaptations have not disappointed. Donna and I love each of the five films so far. Jackson displays the scope of the Tolkien’s world while not losing the small moments that drive the story.

Jackson is at his best in those small moments.

The battle of Helm’s Deep, in The Two Towers, is one of the best battles ever filmed. The most powerful scene, in my opinion, occurs in the buildup to the battle. We see men too old and boys too young preparing for war. The reactions of the wives and mothers might be Jackson’s best direction in the series.

The latest installment of Jackson’s films, The Hobbit: The Desolation of Smaug, contains one of those small, yet powerful, moments.

Our hero, Bilbo, finds himself battling giant spiders which have captured his dwarf friends. Bilbo, with the aid of the One Ring, fights off the pack. Towards the end of the struggle, Bilbo drops the ring. Won in a riddle contest with Gollum, it is Bilbo’s most prized possession.

Bilbo panics when he can’t find the ring.

Finally, spotting the ring on the forest floor, he moves quickly towards it, only to find another spider-like animal in his path.

Bilbo reacts violently. Earlier he fought off the spiders in defense, but now he is aggressive, almost blood thirsty. Once he kills the creature, he holds up the ring, looks at the dead animal, and says, “Mine.”

Jackson assumes the audience has seen The Lord of the Rings trilogy, so that we recognize what the ring is doing to Bilbo. Our hobbit, however, only now begins to understand.

The viciousness of his attack shocks and reviles Bilbo. He covers his mouth as if to be sick. The actor, the brilliant everyman (and my favorite Dr. John Watson), Martin Freeman, communicates this moment perfectly.

Bilbo realizes, but only momentarily, that the One Ring is changing him.

That’s what he called it.

In Colossians 3:5, Paul wrote, “5 Therefore consider the members of your earthly body as dead to immorality, impurity, passion, evil desire, and greed, which amounts to idolatry (NASB).”

Greediness, or the “mine” attitude, is idolatry. Since idolatry places anything before God, then greediness hinders our relationship with Him.

Every believer must ask themselves what they hold most dear.

The things we treasure dictate our behavior. Just as Bilbo acted out when threatened, you and I can act ungodly when thinking we must let go of what we consider ours.

Avoiding this idolatry requires us to admit that what God builds through us doesn’t belong to us.

In 1 Corinthians 3:5-11, Paul shows us the opposite of the “mine” attitude. He wrote, “5 What then is Apollos? And what is Paul? Servants through whom you believed, even as the Lord gave opportunity to each one. 6 I planted, Apollos watered, but God was causing the growth. 7 So then neither the one who plants nor the one who waters is anything, but God who causes the growth. 8 Now he who plants and he who waters are one; but each will receive his own reward according to his own labor. 9 For we are God’s fellow workers; you are God’s field, God’s building. 10 According to the grace of God which was given to me, like a wise master builder I laid a foundation, and another is building on it. But each man must be careful how he builds on it. 11 For no man can lay a foundation other than the one which is laid, which is Jesus Christ (NASB).”

If our foundation is Christ, then what’s “mine” is never an issue.